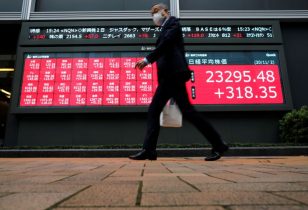 SYDNEY (Reuters) – Asian shares eased from all-time highs on Thursday as widening COVID-19 restrictions in the United states weighed on Wall Street, while bonds were underpinned by speculation the Federal Reserve would have to respond with yet more easing.

Losses were minor with much of the region faring better in containing the coronavirus, though a jump in new cases in Tokyo did nudge the Nikkei off 0.4% and away from a 29-year closing top.

MSCI’s broadest index of Asia-Pacific shares outside Japan fell 0.5%, though that was from a record peak. Chinese blue chips were a fraction firmer.

Pfizer Inc shares had gained after the drugmaker said its COVID-19 vaccine was 95% effective and it would apply for emergency U.S. authorization within days.

Pfizer’s announcement came on the heels of a similar report from Moderna Inc.

Yet, the U.S. death toll still neared a world record of a quarter million as government officials in dozens of states weighed or implemented shutdown measures.

“The vaccines news are a positive medium-term impulse for the global economic outlook and investors are trying to weigh that against the prospect of an imminent stalling of the European and U.S. recovery amid the prospect of extensions of current lockdown measures,” said Rodrigo Catril, a senior FX strategist at NAB.

The drag from new U.S. restrictions was only amplified by the total lack of progress on a fiscal stimulus bill, fuelling speculation the Federal Reserve would have to expand its asset-buying campaign at a December policy meeting.

Two top Fed officials on Wednesday held out the option of doing more.

The chance of further easing has helped nudge 10-year Treasury yields down to 0.85% and away from an eight-month top of 0.975% touched last week.

It has also weighed on the U.S. dollar, which slipped for five sessions in a row before steadying a little on Thursday. Against a basket of currencies it was last at 92.517, still uncomfortably close to recent lows of 92.129.

The dollar has likewise been in a slow decline against the Japanese yen to reach 103.84 and was approaching the recent eight-month trough at 103.16.

The euro has had pandemic problems of its own as lockdowns spread across the continent, keeping it capped at $1.1838 and short of the recent peak of $1.1919.

Sterling dipped to $1.3232 as Brexit talks dragged on. The Times reported Europe’s leaders would demand the European Commission publish no-deal plans as the deadline neared.

Bitcoin, sometimes regarded as a safe haven or at least a hedge against inflation, rose to more than $18,000 for the first time in nearly three years. It last stood at $17,808.

All the talk of policy easing put a floor under gold prices, leaving the metal steady at $1,869 an ounce.