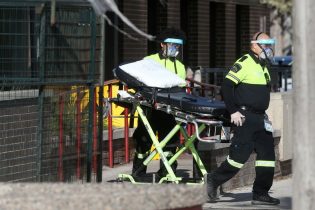 TORONTO (Reuters) – Canada is on track to record 20,000 new cases of COVID-19 per day by the end of December, several media outlets reported late on Thursday, citing new modelling data which is set to be released on Friday.

The modelling, set to be released by the Public Health Agency of Canada (PHAC), shows a worst-case scenario of 60,000 new cases per day if social contacts rise, the Globe and Mail newspaper and Canadian Broadcasting Corporation reported.

The projections point to a sharp increase in daily cases from the current level. Canada’s national average stood at 4,788 new cases between Nov. 12 and Nov. 18, according to government data released on Thursday.

PHAC declined to comment on the reports and referred to an earlier statement from Prime Minister Justin Trudeau on presenting the upcoming modelling to opposition parties earlier on Thursday.

Federal Health Minister Patty Hajdu’s office did not respond to a request for comment.

Cases have been steadily on the rise across Canada for weeks, with several provinces which were relatively successful at tamping down widespread outbreaks in the first wave now seeing critically high numbers.

Hospitals in Manitoba, a province in central Canada, are on the brink of being overwhelmed, according to doctors there.

Provinces have begun bringing in new restrictions and lockdowns, with Manitoba on Thursday banning all social gatherings and forbidding stores from selling anything other than essential goods.

Ontario Premier Doug Ford said earlier this week that his province is “staring down the barrel of another lockdown” as Canada’s most populous province sees its hospital system nearing the point of having to begin cancelling non-essential surgeries.

(Reporting by Moira Warburton in Toronto; Editing by Kenneth Maxwell)