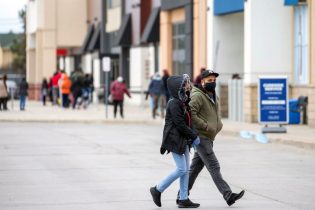 TORONTO (Reuters) – The “bubble” pact between Canada’s four Atlantic provinces has disintegrated in the face of rising COVID-19 cases across the country, as premiers in Prince Edward Island and Newfoundland and Labrador announced quarantine requirements for all travelers from outside their provinces on Monday.

The two provinces joined in a so-called “bubble” with the other Atlantic provinces of Nova Scotia and New Brunswick in early July, agreeing to allow residents from within their borders to travel freely without quarantine. Anyone from other parts of Canada and internationally had to quarantine for 14 days.

But as cases rose in Nova Scotia and New Brunswick in recent days, Premier Dennis King of P.E.I. and Premier Andrew Furey of Newfoundland and Labrador pulled out, instituting 14-day quarantine requirements for everyone entering their provinces starting on Tuesday for at least two weeks.

“The Atlantic bubble has been a source of pride,” Furey said at a news conference. “But the situation has changed (and) I have made the tough decision to implement a circuit break.”

Nova Scotia and New Brunswick were yet to make to any changes to their quarantine rules.

The border restrictions, along with tough public health measures, helped the east coast provinces, which have a combined population of 2.4 million, tamp down COVID-19 early in the pandemic and keep the virus largely at bay even as the rest of the country entered a second wave of infections. The average number of new infections reported in Canada each day recently reached a new high of more than 4,900 daily.

The bubble helped save the all-important summer tourism for region, worth around C$5 billion ($3.8 billion) annually.

“Our healthcare system is strong but it has limitations,” King said. “The potential of a large outbreak as we have seen in other jurisdictions would put pressure on our system and we could easily become overwhelmed.”

(Reporting by Moira Warburton in Toronto; Editing by Denny Thomas and Dan Grebler)