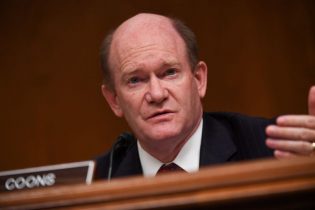 WASHINGTON (Reuters) – U.S. Democratic Senator Chris Coons, who is seen as a contender for secretary of state in the incoming Biden administration, told Reuters on Friday he hoped to see a bipartisan policy on China that would “out-compete” Beijing.

Coons also said in an interview that while the main U.S. focus would have to be on competing with China, it was essential to cooperate with Beijing on areas such as climate change, global health and nuclear non-proliferation.

“I see clearly that China is a peer competitor. And we have to be able at the same time, to cooperate with China in those areas where it’s essential,” Coons said.

“There’s a whole series of areas where the world is only going to get safer and more stable if the United States and China cooperate, but our main focus has to be competing with China,” he said.

A senator from Delaware, Coons is a close friend of former Vice President Joe Biden, who won the Nov. 3 presidential election and is due to take office on Jan. 20

He is also a prominent member of the Senate Foreign Relations Committee and could expect a relatively smooth path to confirmation from his Senate colleagues, even if the body remains Republican-dominated.

Coons said the United States had to “to prepare for the possibility of conflict with China” and this meant “being more active and more engaged on the world stage along with our allies.”

Taking a swipe at outgoing President Donald Trump, he added that United States “can’t just have an approach to the world that is a list of grievances, we have to offer an appealing alternative.”

“Xi Jinping and the Chinese Communist Party are convinced that America’s in decline, that the United States and our system are broken and weakening,” he said referring to China’s leader.

“It’s up to us to show that they are vibrant and strong and capable of solving problems.”

Coons added that he expected the Biden administration to do an analysis with Congress on “where we are and where we’re going and the U.S.-China bilateral relationship before making any decisions about either carrots or sticks” on trade and China’s actions related to the coronavirus, which originated in that country.