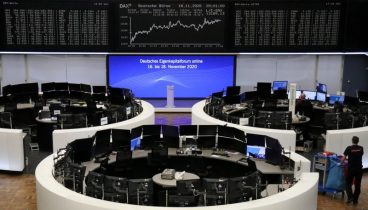 (Reuters) – European stocks fell on Thursday following sharp losses on Wall Street as investors feared another round of shutdowns due to soaring coronavirus cases in the United States.

The pan-European STOXX 600 was down 0.9% in morning session, with growth-sensitive oil and gas, banking, mining and travel sectors falling the most.

The sectors have rallied strongly in November, helped by encouraging news on COVID-19 vaccine that pushed the STOXX 600 to eight-month highs this week.

U.S. stocks came off all-time highs as the death toll in the country from COVID-19 approached 250,000 on Wednesday and New York City’s public schools called a halt to in-classroom instruction in the latest major restriction to curb the spread of the virus.

“Rising coronavirus infection numbers and new restriction measures implemented in the U.S. are weighing on appetite for risk,” UniCredit analysts said in a note.

Investors have been weighing the consequences of tighter restrictions globally on economic growth against hopes of a COVID-19 vaccine supporting a recovery.

A Reuters poll showed economists expect the euro zone economy to shrink 2.5% this quarter after expanding a record 12.6% in the previous quarter.

Ailing German conglomerate Thyssenkrupp fell 6.7% after it said it would need to cut a further 5,000 jobs to ease the impact of the coronavirus crisis on its businesses.

Norwegian Air slumped 14.8% after it filed for bankruptcy protection as it seeks to stave off collapse amid the pandemic.

Swiss engineering company ABB was down 3% on disclosing plans to offload three business units that generate $1.75 billion in sales.

Britain’s Royal Mail jumped 6.3% after it raised its full-year revenue forecast as a surge in online shopping drove demand for its delivery service.

Germany’s HelloFresh rose 3.3% after its CEO said the meal-kit delivery firm would expand its capacity to supply U.S. diners by 50% by mid-2021.

(Reporting by Sruthi Shankar in Bengaluru; Editing by Anil D’Silva)