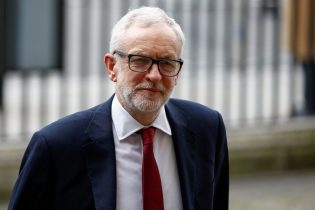 (Reuters) – British former Labour Party leader Jeremy Corbyn will be suspended as a Labour member of Parliament for three months as the party faces calls to launch a new investigation, the Telegraph reported https://www.telegraph.co.uk/politics/2020/11/19/labour-suspends-jeremy-corbyn-three-months-party-urged-launch/?utm_content=telegraph&utm_medium=Social&utm_campaign=Echobox&utm_source=Twitter#Echobox=1605820018 on Thursday.

Corbyn was informed that the duration of the suspension could be reviewed depending on his actions, suggesting it could be shortened or extended depending on whether he issued an apology, the report added, citing sources.

Corbyn was suspended from the party in October in light of his comments after a report said the party was responsible for unlawful harassment and discrimination in its handling of allegations of anti-Semitism.

Less than a month after his suspension, on Corbyn was re-admitted to the party Tuesday.

However, the current Labour leader Keir Starmer refused to re-admit Corbyn to the Parliamentary Labour Party, hence Corbyn would not officially represent Labour in parliament.

(Reporting by Maria Ponnezhath in Bengaluru; Editing by Matthew Lewis and Alistair Bell)