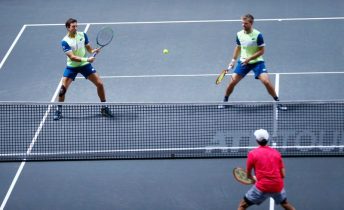 LONDON (Reuters) – French Open champions Kevin Krawietz and Andreas Mies bowed out of the ATP Finals as they lost a deciding group match against Britain’s Joe Salisbury and American Rajeev Ram on Thursday.

Salisbury and Ram, who won the Australian Open this year, moved into the semi-finals.

With Salisbury still involved it means the host nation will retain some interest heading into the weekend of the 12th and last edition of the tournament to be staged in London.

Wesley Koolhof and Nikola Mektic won the group despite losing to Lukasz Kubot and Marcelo Melo who were playing the last match of their four-year partnership.

The other group will be decided on Friday, with Marcel Granollers and Horacio Zeballos top having picked up two wins. They face Jurgen Melzer and Edouard Roger-Vasselin next.