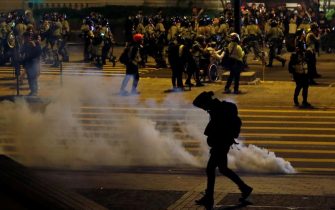 Hong Kong’s Journalist Association had launched a judicial review in 2019 following widespread anti-government protests, arguing that the government had an obligation to set up a mechanism capable of “effective investigation” into suspected ill treatment by the police.

An independent enquiry into police handling of the protests in the semi-autonomous, Chinese-ruled city became a main demand of the protesters last year, along with universal suffrage.

The former British colony’s Beijing-backed leader, Carrie Lam, has said the existing mechanism was sufficient to deal with complaints and there was no need to set up an independent system.

The court disagreed and stated that the government was under a “duty pursuant” to Article 3 of the Hong Kong Bill of Rights, to establish and maintain an independent mechanism.

“The existing complaints mechanism involving the complaints against the police office, with oversight by the Independent Police Complaints Council, is inadequate to discharge this obligation,” the court said in its judgement.

Hong Kong’s Bill of Rights was introduced in 1991 as the then British-ruled city was preparing for its 1997 handover to China under a “one country, two systems” formula aimed at guaranteeing it a high degree of autonomy.

The court ruling comes amid fears in the city over the erosion of its judicial independence by Beijing.

A senior Chinese official said on Tuesday that authorities were working on reforms related to Hong Kong’s mini-constitution, including its judicial system.

The independence of Hong Kong’s judiciary is seen as crucial to its role as an international financial hub and an interface between mainland China’s closed capital system and the rest of the world.

The court also ruled that police officers not prominently displaying their identification numbers also violated the Bill of Rights.