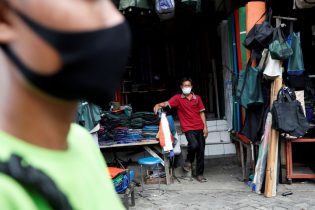 JAKARTA (Reuters) – Indonesia reached a grim milestone on Monday in surpassing more than half a million coronavirus cases, as average new daily infections hit a record and hospitals in the country’s most populated province edged closer to capacity.

Indonesia now has 502,110 infections and 16,002 deaths from COVID-19, the highest numbers in Southeast Asia, having struggled to contain the spread since its first case in March.

Health experts say shortfalls in testing and contact tracing and a consistently high positivity rate – the infection rate per person tested – indicate the real numbers are likely to be significantly higher.

In the capital Jakarta, where relatively loose social restrictions are in place until Dec. 6, some met the milestone with glum resignation.

“The government isn’t serious and the people are getting fatigued,” said Ahmad Rozali, a clothes trader at Tanah Abang market.

“There’s an air of fear among the people,” said another trader, Dewi Nuraini, 45, who described the economy as “crumbling”.

“If we want to start a business, it will meet a dead end,” she said.

Average new daily cases in Indonesia have been about 4,000 in November, with spikes in some provinces straining hospitals on the main island of Java.

There were more troubling trends in Monday’s data, with the seven-day average of new daily infections hitting a record 4,495 and the positivity rate at over 16% for three successive days.

In Bandung, the capital of West Java, a province of almost 50 million people, occupancy at 27 referral hospitals was 88.8% on Monday, city secretary Ema Surmana told Reuters, with 698 of the 786 beds for coronavirus patients taken.

“If it happens in West Java, it doesn’t necessarily happen elsewhere,” he said.

“But looking at the trend, it is still increasing in all provinces… Nowhere’s reached its peak.”

West Java’s occupancy rate in its COVID-19 wards was 73% and also hovering above 70% were Banten and Central Java provinces, according to an internal health ministry document seen by Reuters.

The ministry did not immediately respond to request for comment on those rates.

However, Wiku Adisasmito, spokesman for the country’s COVID-19 task force, said occupancy rates of around 70% in coronavirus wards were still within the “ideal” range as defined by the health ministry.