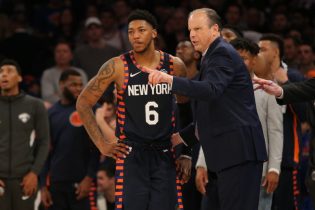 Two days after being among a group of six players released by the New York Knicks, the team agreed to re-sign starting point guard Elfrid Payton to a one-year, $5 million contract for next season, multiple outlets reported Saturday.

The Knicks also agreed to a one-year, $5 million deal with center Nerlens Noel, according to multiple reports.

The 6-foot-3 Payton needed only 48 hours to get his job back. Since the NBA’s free agency period tipped off on Friday, several other point guards have agreed to deals — including Fred VanVleet staying with the Toronto Raptors and D.J. Augustin heading to the Milwaukee Bucks.

The Knicks are Payton’s fifth NBA organization since being drafted by the Philadelphia 76ers with the 10th overall pick in 2014. The 76ers shipped Payton to Orlando in a draft-day trade that summer, where he played for three-plus seasons before being dealt to Phoenix in the 2017-18 season.

The well-traveled Noel spent the past two seasons with Oklahoma City, averaging 7.4 points and 4.9 rebounds in 61 games (seven starts) for the Thunder last season. The Knicks will be the 26-year-old’s fourth team since being drafted No. 6 overall by the Philadelphia 76ers in the 2013 draft. His 2.9 blocks per 36 minutes ranked 10th in the NBA last season.

The Knicks are rebuilding under new team president Leon Rose and new coach Tom Thibodeau. New York finished the 2019-20 season with a 21-45 record and has not had a winning mark since the 2012-13 season.