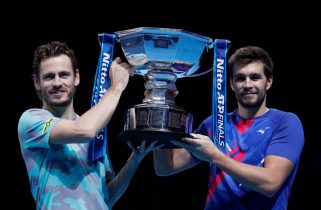 The fifth seeds, in their maiden season together, had lost in their other two finals, including at the U.S. Open, but it proved a case of third time lucky.

“It was a dream come true just to have qualified here for this event,” Koolhof, the fourth Dutchman to win the doubles title at the season-ender, said.

“It’s our first title together. Not bad for a first one,” Mektic said.

Austrian Melzer, a former top-10 singles player who is retiring, had hoped to end his career on a high.

“It was a hell of a ride,” the 39-year-old said. “We have been fighting hard since Roland Garros, played almost every week to get here. It stings today, and it hurts, but in the end we’re going to look back at being runners-up here.”