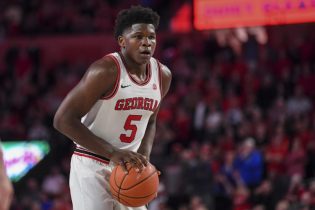 (Reuters) – The Minnesota Timberwolves selected former Georgia guard Anthony Edwards with the first pick in the NBA draft on Wednesday in a move the team hopes will help revive the struggling franchise.

The 6-foot-5, 230-pound teenager will join point guard D’Angelo Russell and center Karl-Anthony Towns on a Timberwolves team that finished 19-45 and in second to last place in the Western Conference last season.

The athletic 19-year-old displayed NBA caliber moves during his one year with the Bulldogs and is explosive when driving to the basket but questions remain about his defensive and three-point shooting abilities.

“It’s an indescribable feeling,” Edwards said. “I’m blessed beyond measure to be in this situation.”

Edwards sat surrounded by portraits of his late mother and grandmother, who both died of cancer.

“They are with me at all times,” he said.

James Wiseman, a 7-foot-1 center who can shoot and block shots, was selected second by the Golden State Warriors.

Wiseman is a somewhat unknown commodity, having played just three games in college at Memphis.

“I’m truly ready to go to Golden State and just learn as much as possible,” he said.

Although it was unclear how serious the injury was, some thought it might force the Warriors to select another guard but the team stuck with their plan to get Wiseman.

The selection of Edwards first in the draft registered as a mild surprise as many predicted guard LaMelo Ball’s name would be called first.

Instead, the Charlotte Hornets selected the Californian with the third pick.

The 6-foot-7 Ball is an outstanding ball handler and creative passer but the Hornets will need to help him develop into a more consistent shooter.

Ball most recently played professionally for the Illawarra Hawks in Australia’s National Basketball League and is the brother of New Orleans Pelicans guard Lonzo Ball, who was the second pick in the 2017 NBA draft.

Onyeka Okongwu, who like Okoro was born to Nigerian parents, went sixth to the Atlanta Hawks.

Like this year’s NFL and NHL drafts, the NBA draft was held virtually with players, teams, and Commissioner Adam Silver all communicating digitally to curb the spread of the novel coronavirus.

The pandemic forced the NBA to halt play in March before it completed its season in a bio-secure bubble at Walt Disney World in Florida and crowning the Los Angeles Lakers the champions in October. The regular season is set to start on Dec. 22.

The NBA draft https://www.reuters.com/article/idUSKBN27Z08R typically revels in glitz and glamour and Silver said he felt bad for the players and their families that the event had to be held virtually.