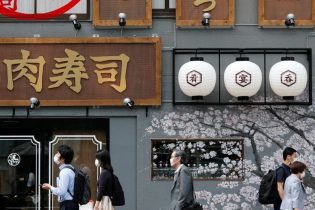 TOKYO (Reuters) – Tokyo will urge bars and restaurants to operate shortened hours, the latest restriction to be implemented in Japan following sharp rises in COVID-19 infections, media reported on Wednesday.

The Japanese capital has seen new daily infections soar past 500 on several days recently and the number of serious cases reached 51 on Tuesday, the most since a state of emergency was lifted in May.

The city of 14 million people will ask restaurants and bars to close at 10:00 p.m. from this Saturday until Dec. 18, broadcaster TBS reported.

Separately, a panel of experts advising the national government is also due to meet later on Wednesday.

Japan on Tuesday paused its domestic “Go To Travel” promotion campaign in the cities of Sapporo and Osaka.

The programme, which offers discounts on fares and hotels and is part of Prime Minister Yoshihide Suga’s efforts to help prop up regional economies, has been criticised for potentially spreading the virus from major cities to the countryside.

The Tokyo government will also look at halting a separate campaign offering subsidies for travel in the capital, TBS said.