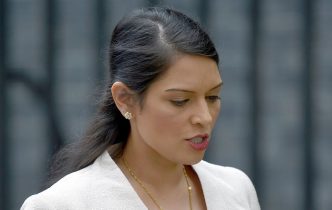 LONDON (Reuters) – British Prime Minister Boris Johnson on Friday backed one of his most senior ministers after a damning inquiry into allegations that she bullied her staff concluded she had broken rules, including shouting and swearing at them.

Patel had not met the standards set under Britain’s Ministerial Code which states ministers should treat officials with respect, Allan had concluded. Ministers usually step down if they are found to be in breach of the code.

A government statement said Johnson judged the code had not been breached, however, saying that concerns had not been raised at the time and that Patel was unaware of the impact of her actions. She apologised for any upset she may have caused.

“The prime minister has full confidence in the home secretary and considers this matter now closed,” the statement said.

A former senior official Philip Rutnam, whose resignation and accusations of unfair dismissal in February prompted the inquiry, said concerns about Patel had been repeatedly raised to her and that he had not been asked to give evidence.

“As early as August 2019, the month after her appointment, she was advised that she must not shout and swear at staff,” Rutnam said in a statement.

The issue comes at a difficult time for Johnson, who is trying to reset his government after his top adviser Dominic Cummings left Downing Street last week. His leadership and judgment has also been questioned over his handling of the coronavirus pandemic.

Patel was a leading supporter of Brexit before the 2016 referendum and is popular in the ruling Conservative Party. She is the minister responsible for crime, security and immigration where she has advocated a hardline stance.

The daughter of immigrants herself, she previously quit as aid minister in 2017 because she held undisclosed meetings with Israeli officials.

Immediately after Johnson cleared Patel, Allan quit and opponents accused the prime minister of giving the green light to bullying. Johnson himself had written in the foreword to the Ministerial Code’s latest version that “there must be no bullying and no harassment”.

“I recognise that it is for the prime minister to make a judgment on whether actions by a minister amount to a breach of the Ministerial Code,” Allan said. “But I feel that it is right that I should now resign from my position.”

Johnson’s government has had an uneasy relationship with senior officials, with several leaving their posts since his election win last December.

Patel had been accused of demeaning her staff, prompting Johnson to launch an inquiry in March to establish the facts.

In a summary of his advice, Allan found that Patel had become “justifiably in many instances” frustrated by officials’ lack of support, and this had “manifested itself in forceful expression, including some occasions of shouting and swearing”.

“Her approach on occasions has amounted to behaviour that can be described as bullying in terms of the impact felt by individuals,” Allan’s advice said. “To that extent her behaviour has been in breach of the Ministerial Code, even if unintentionally.”

Patel said it had never been her intention to upset anyone.

“I am sorry that my behaviour in the past has upset people,” she said. “I acknowledge that I am direct and have at times got frustrated. I would like to thank the Prime Minister for his support.

Colleagues rallied round her, describing her as kind and courteous.

But opposition Labour Party leader Keir Starmer said he would have sacked her.

“Yet again, the prime minister has been found wanting when his leadership has been tested,” Starmer said in a statement.