Warriors’ Thompson out for season with Achilles tear: report 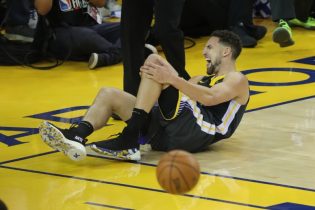 (Reuters) – Warriors All-Star guard Klay Thompson will miss the NBA season after tearing his right Achilles during a practice game in Southern California on Wednesday, ESPN reported on Thursday.

The sharp shooting 30-year-old missed all of last season with a torn anterior cruciate ligament he suffered during the Finals last year and the three-time NBA champion was poised for a big season alongside fellow “Splash Brother” Stephen Curry.

While Thompson’s return to NBA action will have to wait, early indications suggest he will be able to fully heal.

“Based on the type of tear, Thompson has been told to expect that he will make a full recovery,” ESPN reported, citing a source.

The NBA regular season kicks off on Dec. 22.